Klavs has gone down a new path path with his models and has started looking at ships from Super Wing Commander. The first one he's put together is the TCS Tiger's Claw. Even if you didn't play SWC, it should still look familiar as a variant of the TCS Lexington in Armada. Klavs has merged some elements from the DOS version into the design, including the interior of the flight deck, which is pretty neat. 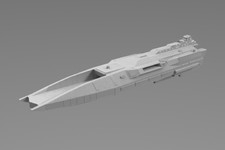 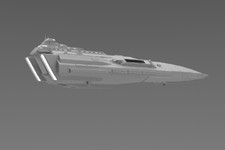 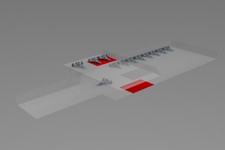 Unlike most of you, SWC on the Mac was the first exposure to Wing Commander I had, so I'm a bit partial to that version of the Tiger's Claw. That said, I respect a lot of the elements of the classic WC1 Claw, and I've tried to incorporate some of them.

The ship is scaled to 700 meters, per the ships database. That makes the hangar deck a mite cramped, but still larger than your average Escort Carrier. I'm not sure about adding an extra hangar deck, I like my ships to have lots of internal volume for fuel tanks, especially when you're talking about a carrier with lots of thirsty spacecraft!

I hope you guys enjoy. The Claw has many different variants, but it's always a welcome sight when you come limping home, trailing sparks with scorch marks all over your ship!

Scene 144 features a famous conversation between Blair and Paulson about eugenics. The thing I can't figure out is why the Border Worlds in particular are supposed to be genetically inferior in this Nazi analogy--they're just Confederation colonies that happened to be on the Kilrathi border.