Klavs is putting a lot of thought into the pilot of his flashy Rapier. Since his first draft (rendered below), he's sketched out a variety of character styles based on different sources. The image below shows the progression back towards the classic outfit from Wing Commander 1. Looks good to me! 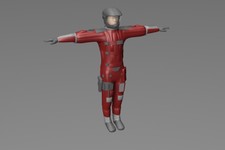 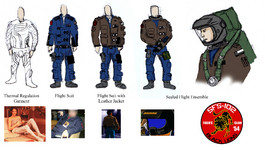 After playing with some other designs, I worked out this sketch to help me think about designing the pilot. After playing some WC1 again, I decided I really like the classic fighter pilot leather jacket look. It's also a callback to the WC3/4/academy brown flight suit

The leather jacket is a protective garment that goes over the spacesuit proper (with holes for the suit hardware) to save wear and tear on the suit body (the suit itself is a two-piece soft system) and to provide some additional external pockets. It can also be worn off duty over a standard coverall or t-shirt to create esprit de corps among the pilots.

Scene 71: Blair is lost and confused by the changes on the Lexington and the fate of his old friends... so he turns to confide in... Admiral Tolwyn? Bad choice, buddy.