The next CIC Birthday is just one month away! Come celebrate with fellow fans and watch the website turn twelve years old on August 10, 2010. The party starts at 7:00 pm Eastern US time (4:00 pm Pacific and 11:00 pm GMT) in the IRC channel #Wingnut. It's a great chance to catch up with other Wingnuts, and lucky fans will also have a chance to win rare and exotic prizes. First time partiers can get up to speed via the simple Java interface. Clear your calendars and don't miss it! 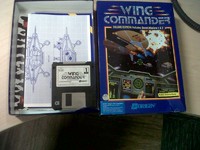 CrazySpence recently added a copy of Wing Commander I Deluxe to his collection, and he had to share it with the world. He's posted pictures and described his glee at The Kingdom of Philtopia. What a great feeling it is to get a new Wing Commander game. Check the posting out here.

A few weeks past and I found a set of Wing Commander 1 with the original fighter specs however after some heavy bidding I lost it to someone else and felt rather defeated. I took one more pass at ebay and found a “Buy it now” of Wing Commander deluxe edition IN THE ORIGINAL BOX with FIGHTER SPECS, CLAWMARKS, WC1, Secret missions 1 and 2 plus the install manuals, a 1990 catalog and some other paperwork from Origin! I jumped on that quickly and awaited shipping.

Today it has arrived and it is Christmas in June for me! The box has a dent in it but all the contents are in excellent condition. For being almost 20 years old I would say it has held up pretty damn well and I look forward to liberating the Vega Sector, chasing down the Sivar and liberating Firekka from Kilrathi Occupation!