Kevin Caccamo has posted several updates to his addon/mod to the WC Saga Prologue. He's released shots of the latest texture updates to the WC Hostile Frontier Rapier and Raptor. Standoff fans should find the Raptor familiar, and the Rapier has been heavily inspired by Dean McCall's movie concept art. The blue and red roundels are intended to represent the Republic of Landreich. This is the first in what will hopefully be a series of 'dev diaries' on the continued development of the project. 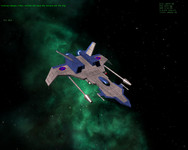 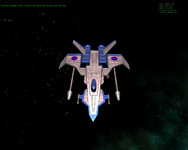 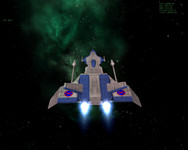 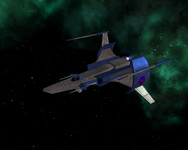 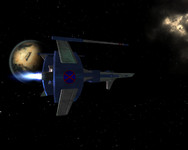 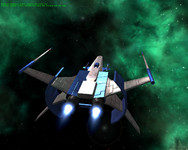 Here's some of the new stuff that I've been working on for the past few months. I've been experimenting with GIMP to make textures for the ships. Here's what I came up with for a Landreich Raptor. Thanks to the Standoff team for the Raptor model.

The base texture is made of three layers: a plain white layer, a layer with Perlin noise, and a pixellated noise layer. On top of the base texture, I have a multiplicative layer for the coloured parts of the ship and a layer for stuff like the cockpit glass and the intakes. I also have two invisible layers for the bumpmap and the UVs.