Remember that early, wingless Excalibur which TonViper had just begun to build back in August? It's shaping up nicely -- complete with a spiffy new coat of paint! Check it out: 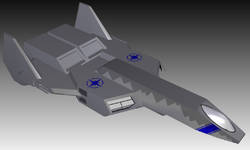 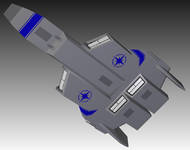 This is the thirteenth set of Feng Zhu concept artwork pieces. Unlike the previous sets, the origin of these is clear: they are the characters developed for Wing Commander: Shadow Force, an aborted follow-up to Secret Ops. This second half of the cast seems to consist of mercenaries, privateers and other shady characters. They're a bit more varied than the Confederation crew... and occasionally a good bit sexier.