Redlime Still Still Out There

It has been eight months since the announcement of Starbreeze's "Project Redlime" and nearly three since we last heard the slightest mention that it was still in the works. Now St3lt3k has found a reminder that that's still the case. He notes that the board admin at the Starbreeze Forums recently responded to a question about the project with a few short words: "Yup, Project Redlime is in production. That is all we can say." So, there you have it: not abandoned. Redlime could be a Wing Commander project... or it could be something entirely unrelated and disappointing. We'll know -- someday.

This is the fifth set of Feng Zhu "concept" ships, commissioned for an unspecified Wing Commander title following the release of Secret Ops. While the human designs were somewhat unusual, the origin of these fighters should be apparent to anyone - they're absolutely classic Kilrathi knife-edge designs. Note that a lower-resolution version of the fighter image which is 'cut off' is available here. 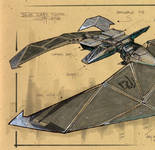 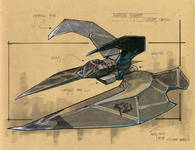 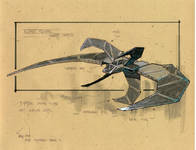 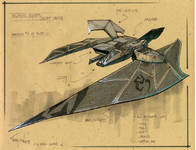