JasonRocZ recently spent quite a bit of time revising his Rapier Vanguard and has produced an impressive Rapier Blade. The new textures included here emphasize the stabilizers on the forward fuselage to bridge the Wing Commander I and Super Wing Commander designs slightly. This popular Wing Commander Arena ship will appear in his upcoming Collateral Damage mod for WC Secret Ops. Jason is also hard at work on a variety of Nephilim ships with updated textures. 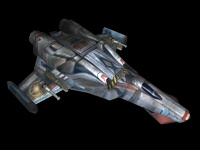 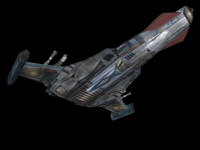 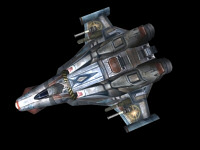 This is the Star*Soldier gloss for the Crusader page:

CONCEPT: Most Origin games included this type of in-joke, if not in their manuals then in the games themselves. Voices of War advertised the Bioforge movie, Victory Streak had a review of System Shock, etc. I should note that these were in-jokes - no one meant for all Origin games to have a shared continuity.

The background is a heavily filtered version of (part of) the Crusader: No Remorse artwork. This page was originally a quarter-sized advertisement which was blown up to a full page because the concept deserved better. There's also a hilarious 'early sketch' placeholder of this where I drew the Crusader dude freehand in MS Paint somewhere...