Howard Day is moving on to new capships. Here's his awesome Exeter class destroyer. It'll make a fine escort to his massive Bengal, and the ship certainly looks impressive on its own. Fans can clearly see that significant progress has been made and the model is already nearly done. Certain elements are reused from Howard's strike carrier, but the overall design is its own and matches the original well. Check out the neat Hornet and small landing strip in the rear. 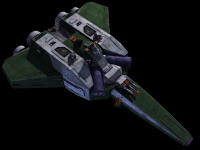 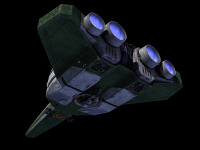 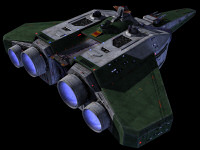 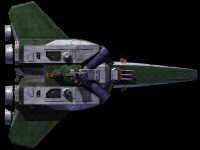 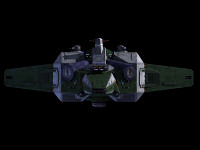 I've gotten a fair way along on the Exeter class destroyer. Key points: the triple-laser battery, the small landing bay behind the bridge for the 18-strong fighter complement, and those two weird cylindrical things forward of the bridge. So, this will be done shortly - I just have some random tightening up to do.

This issue of The Point of Origin (September 20) represents a high water mark for Wing Commander fandom -- with a whole host of amazing spinoffs getting ready to appear. Who can forget the anticipation as we read these very articles about Privateer 2, Wing Commander Academy and Kilrathi Saga?

Two months ago, PC Gamer editors made their way to Austin to see what was cooking. The result was 12 pages of pictures and articles in the latest issue featuring all of our upcoming products from Privateer 2 to Ultima IX to the Wing Commander Academy animated series... As for products, Garry Whitta and Michael Wolf were obviously impressed with what they saw... Whitta, Gamer's Editor-in-Chief, was given a full demo of Privateer 2 during the visit and he too came away with plenty of positive impressions. "Fans of Privateer are in for a treat," Whitta wrote. "The British design team based in Manchester, England, and led by Erin Roberts has pulled out all the stops to make The Darkening ORIGIN's most impressive space opera yet."

There's even some interesting support articles regarding Wing Commander: The Kilrathi Saga, Wing Commander Academy (the animated series which kicks off tomorrow on the USA cable network) and former ORIGINite Chris Roberts, who had some eyebrow-raising quotes about his departure from EA/ORIGIN.

After you've read PC Gamer, you can check out the October issue of Computer Games Strategy Plus, which features Privateer 2 on its cover. Editor Steve Bauman also flew into Austin two months ago to do research on his cover story (check out the other picture with this article). "It (Privateer 2) looks like it has the depth, beauty and gameplay to win over a new generation of gamers, one which has grown accustomed to being blown away with each ORIGIN release. Once you enter battle you get a superb 3D engine, faster than Wing Commander's, with high-resolution graphics and a series of little details setting it apart from the pack."

I would like to recognize one of your tele-support technicians, Anthony Salter, for the outstanding support provided with a problem encountered with the installation of Wing Commander IV. As a former employee of a large computer manufacturer selling and supporting systems over the telephone, I am familiar with the heavy requirements placed on these members of any organization supporting hardware or software in today's market.

The support provided was outstanding through the entire process, including the front-end phone system. I smoothly worked through the menus and was quickly greeted by Anthony moments after being placed in the queue. It was apparent to me from my experience that the system provided to Anthony was well designed to support me as well as capture the relevant data to support me on future calls. Anthony guided me precisely to a solution and waited to assure that the solution worked. It is not always the case that the consumer receives such prompt and accurate support, but it was a pleasure to receive this for the purposes of loading a game and not a business application for once.

I take the time to write this letter as I hear my son blasting away at oncoming intruders from another planet, or something like that. I commend Anthony and your organization for exceeding my expectations from a software vendor. You can count on our continued business.

Point of Origin
Vol. VI, No. 7 - September 20, 1996
Contents
Spotlight: Crusader: No Regret Ships!
New Hires
From the "Uh, Whatever" Files
Point Man
Ultima Goes Hollywood
In Ink
News In Briefs
The London Report
Product Support Spotlight Letter
EOM
... and a fun cookout was had by all...
The Future
Ticker