Péricles has a special Valentine's Day treat for everyone - two new paper models! The Panther and Border Worlds Assault Shuttle are now available for everyone to build. Both look fantastic, just like all the rest. As cool as it is to see these new designs, Péricles also has some bad news. Due to a hard drive failure, he's lost a handful of ships, including the Waterloo, Dralthi VII, Hornet, Epee, Ralatha and Vindicator, that were in various stages of modeling. Not to worry however, Péricles is hard at work on the next batch. He has already begun rebuilding the Dorkathi and Clydesdale. They should be the next releases. Check out regular status updates at his website here. 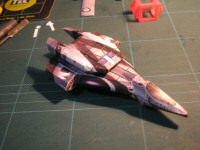 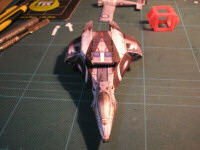 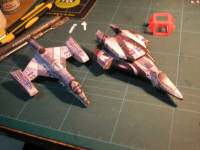 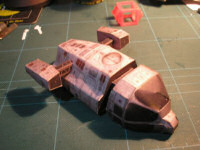 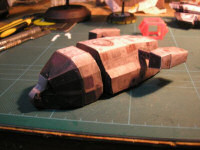 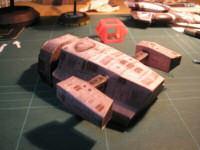 As promised, we are releasing new models. This time it's two simple ships from Wing Commander IV: The Price of Freedom and Wing Commander Prophecy/Secret Ops.

The first is the beautiful Panther fighter of the Terran Confederation Navy. For me it is one of the most elegant ships in the whole saga. The model is 1/200 scale and very simple to build with some patience and a couple hours. In the file there are two versions. One is a PDO file blocked to serve as instructions that can ONLY BE OPENED IN PEPAKURA VIEWER 2.

The other ship is the opposite of the sleek Panther: the Assault Shuttle of the Navy of the Union of the Border Worlds. This very ugly ship in 1/100 scale. It is used by the Space Marines Corps of the Border Worlds for approaches to larger ships. This model is simple, and it too can be done in just a few hours.

Good assembly! Until next time!

Introducing the Origin logo you all remember! That's right, the familiar blue and white 'marbled' starbust didn't show up until November 1995! All the details of its lengthy creation process can be found in this issue of The Point of Origin...

The December issue of Strategy Plus magazine (check out the picture accompanying this article) is the first of four magazines that will spotlight Wing Commander IV on the cover. Ben Chiu, who traveled to Hollywood in June to cover the production, wrote the feature article. "The amount of detail put into the sets and props, combined with the very capable and professional abilities of the crew, puts the overall production on equal terms with some of the best movie productions. Wing Commander IV has all the markings to be another big hit for ORIGIN."

During November, look for Wing Commander IV to be on the covers of Computer Gaming World, Computer Game Review and Interactive Entertainment, too. Thanks to Chris Douglas on the WCIV team for his work in getting most of this art together. Oh and, by the way, it's pretty spectacular looking art, to boot.

... Finally, they're still talking out there about ORIGIN games that have been on the shelves for a while. Joe Blenkle who writes for the Orangevale News in California had plenty of good things to say about Wing Commander III for 3DO. "Probably the most satisfying game I've ever played. The best title out there for the 3DO."

And ORIGIN had a couple of games listed in a new book out about multiplayer, CD-ROM Buyer's Guide from Signet publishers... About WCIII Sengstack wrote, "Wing Commander III achieves that perfect balance of arcade action and dramatic tension. It doesn't get much better than this."