In 1999, just before the Movie came out, Starlog sci-fi magazine published a special Wing Commander edition. Besides having Freddie Prinze Jr. on the cover, 'Starlog Movie Hits Wing Commander' was largely devoted to the upcoming motion picture. The special publication focussed on the behind-the-screens aspects, featuring interviews with cast and crew, articles and a great number of pictures, art designs and sketches. Readers could also write in to win one of two crew jackets. Check out the cool pilot badges:

One jacket went to a member of the CIC community. Much of the content wasn't new at the time, but it was great as an introduction to the movie. It's also great to flip through nearly ten years later. I remember placing a special order with Borders for four times the actual sales price! 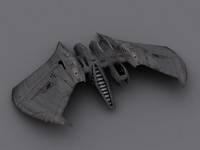