Here are some Korean missiles that won't malfunction! Following in the grand footsteps of Alkarion's recent updates comes The Origin Museum's Joe Garrity, with a pair of high quality scans of foreign Wing Commander advertisements!

The pages are for Privateer, Wing Commander Academy and Tactical Operations. It seems a normal thing today, but the idea of developing Wing Commander 'spinoffs' was entirely new when Academy and Privateer were announced in 1992. It was an exciting time.

Tactical Operations was the add-on disk released for Strike Commander. It continued the story and introduced several new airplanes... including F-117 Stealth Fighters, which were white with green spots!

"Ground controllers, in a joking e-mail to the crew, suggested several games to pass the time, including "who can toss the laptop furthest down the station before it bounces off the wall" and "a few appropriate computer games" such as "Asteroids, Space Invaders or Star Wars' Wing Commander."

Star Wars? Why, I never! But it's still pretty neat... watch out for stealth fighters, Discovery. 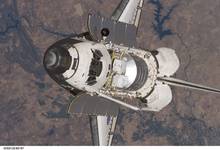 Bret wanted to let everyone know that the full text of mission control's email can be found here.