Captain Sarah Molynieux - For the past 5 years Sarah has carried the callsign "Widowmaker." This was a title she has earned rather than necessarily claimed. Aggressive to the point of stubbornness, Sarah has never backed down from any fight. Always ready for action, adventure and often the life of any party (including the illegal ones), Sarah is a poster child of optimism and courage. She would have been promoted further had it not been for her repeated instances of disobeying direct orders and disciplinary lapses. Despite these frequent marks on her record, her knack for resolving matters quickly and effectively have kept her on the flight roster. 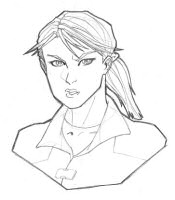 Major Jack Bradley - His wingmen have called him "Stoneman" since his first sortie, Jack inspires respect and awe with his cold, efficient and deadly piloting skills. Orphaned at a young age and filled with a desire for revenge, Jack applied for the Academy when he was still a full two years below their required age. They rejected his application and so he joined with the marines (it was later determined that he "incorrectly" submitted his age on the Marine application). After his two years with the Marines were finished, Jack requested transfer to the Academy to become a pilot. His request was granted and finally, Jack was admitted to the Academy to train. Jack sailed through the Academy with high marks and glowing recommendations, he was assigned to the TCS Tiger Claw upon his graduation in 2644. Jack served during the Claw's participation at Custer's Carnival and flew with distinction that earned him a Silver Star. He continued to serve aboard the Claw until 2651 when he reassigned to the TCS Falcon. 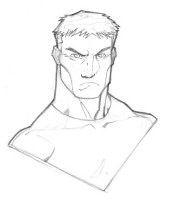 The search for Thomas Halcyon's callsign has ended as well. The winning selection is "Tomcat."

Get Your Votes In Soon

Just a reminder that voting for our annual Site/Fan Project of the Year awards is in progress now. Your favorite project needs your support and there are only a few votes between the leaders, so your vote counts. Send your vote in via email. You can find a complete list of the candidates here. Oh, and please only vote once.

EA has just announced that it has secured exclusive rights to the National Football League teams, players and stadiums. This contract covers virtually all types of video games on all significant platforms for the next five years. This is a huge bonus for the EA's Madden series and investors (stock price is up about 12% in the last day), but it's a crippling setback to various competitors such as Sega or Midway. The last couple Madden titles have exceeded five million copies sold. Most recently, Sega's ESPN NFL 2K5 has gained market share by undercutting Madden's price by 60%. EA's response now eliminates the possibility of ESPN NFL 2K6 being produced.

"We are excited about the opportunity to further enhance our relationship with the NFL and PLAYERS INC," said Larry Probst, Chairman and CEO of Electronic Arts. "The five-year agreements will usher NFL fans through the console technology transition with new ideas and innovative game play experiences."

Both agreements are exclusive for action simulation, arcade-style and manager games on the PC, handheld game devices and consoles -- including console online features. The agreements do not include exclusive rights to other types of games or games accessible from the Internet or wireless devices, including cellular phones.

GameSpot and Slashdot have some additional commentary on the issue as well.