This one is a bit unusual. Interstellar Flames 2 is under development for the upcoming Gizmondo handheld gaming system. The Gizmondo faces an uphill battle in the handheld market as it tries to carve out a niche like the Nokia N-Gage. At one point we might have overlooked games on a platform such as this, but after seeing Raylight's spectacular results with Prophecy Advance, IF2 is worth a closer look. 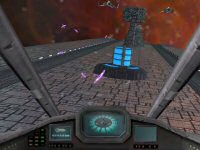 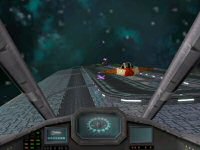 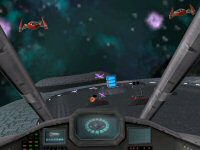 The game is running on the Gizmondo's 400 MHz ARM9 processor and displaying to a 320x240 screen, compared to the GBA's 240x160 pixel screen backed by a 16 MHz ARM7. That being said, there's not a whole lot of visual difference between the two. Interstellar Flames would display more at a time due to the higher resolution screen, but its backgrounds seem much more blurry, and this causes the entire presentation to seem less sharp. The screenshots that have been released show decent capital objects, but ones generally comparable to the TCS Midway. The game is also being portrayed as much of a straight shooter than a space combat simulator with story elements.

A vast horde of alien battleships is approaching our solar system. Due to maintenance problems only one fighter craft is ready to defend the planet. Fly dangerous missions against huge battlecruisers, dogfight with enemy fighters in asteroid fields and destroy the alien fleet before it enslaves Earth. Can you face them alone?

The game unfortunately seems to lack any multiplayer mode as well. This is disappointing since the Gizmondo is claiming to be a multiplayer pioneer with wireless play through the cell networks and GPS assisted gameplay. More handheld space sims are definitely welcome, but it seems that IF2 has yet to live up to its full potential. As it seems the game is still in the early stages, there may yet be further developments as the game gets closer.