We've come to the end of our road - with the most impressive Kilrathi capital ship of the lot... the Agon Ra Sivar-class Dreadnought. The dreadnought makes its first appearance in "Chain of Command," and continues to appear as Crown Prince Thrakhath's flagship in "Expendable" and "Glory of Sivar." His armament consists of five dual mount laser turrets, six forward laser batteries and eight single mount laser turrets - as well as a full complement of fighters. Many have compared the Agon Ra Sivar's design to that of the Confederation Durango-class from Wing Commander IV... so don't let appearances deceive you! The dreadnought has three times the shielding of an average carrier!

Well, that's it! We hope you've enjoyed this survey of the many varied ships of Wing Commander Academy. Did we miss something? Want to let your opinion out in a mailbag? Let us know! 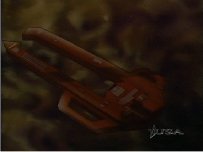 In SET your goal is to identify sets of three cards from a deck of 12. If you're not familiar with the game you can read up on the rules here. It's trickier than you might think. Dishwasher is now working on a Wing Commander themed version:

Hi, for the last few days I have been working on a java version of the card game SET, coding has been going well so I got it into me to create a Wing Commander theme for it! :) Although all the game mechanics are present in this version of the game i recon that it will take a few more days to complete all the more fun details like a decent user interface and highscores etc etc. I guess I will eventually post the game on my website for everybody to enjoy, but for now i've included a screenshot. 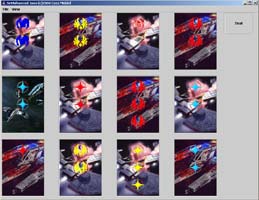