The Wing Commander MUSH Fiery Ardor is now accepting players. We mentioned last month that they were looking for staff members to polish things to a play-ready state. Although there are still a number of things to implement, you can join the game, create a player and role play a bit. Complete space combat is yet to come, but a large part of this game is character development and that is ready to go.

We're quite a bit along now. So much so, most of the staff agrees that we can now accept players. Only catch is that the space combat code is not 100 percent complete yet. Regardless, the areas and everything else are pretty much done. So if you just want to hang out and RP or even just chat, Character Creation is now unlocked and folks can go through.

Our site host is: ardormush.quackster.net
Port is: 8888

You can connect with a standard Windows telnet client, but Ierocis recommends SimpleMU or MUSHclient to play. He can field questions at Crius.net here.

One of the biggest multiplayer shooters to grace the PC in the last year is Unreal Tournament 2004. Although it is well known as a great first person shooter, the 2004 interation includes varied gametypes including a space borne assault. A larger starship is attacked by fighters, and then the ship's crew ends up defending against boarding parties in a more traditional Unreal setting. Quite a few reviewers have picked up on this mode's similarities to Wing Commander.

GameSpy: Starting in the cold vacuum of outer space, the map comes complete with controllable spaceships offering Descent-style freedom of movement and some Wing Commander-type dogfighting.

IGN: Even more impressive, another map starts with both teams piloting spacecraft for a Wing Commander-style dogfight, the attacking team attempting to board a giant Skaarj mothership. Once the ship is boarded, the action switches on-foot.

IGN: The combination of initial Wing Commander-like dogfights with more traditional troop assault worked very well, and apart from a few control and targeting niggles, it's a smooth transition from flying to running.

ActionTrip: There's a space-based Assault map called Mothership, which thrusts you off into orbit and allows you to challenge other players in classic Wing Commander-style dogfights.

It seems like there's at least a little Wing Commander nostalgia on the part of the gaming journalism community. If you're both an FPS and space combat fan, this one is a great match. With the associated mod tools already available, Unreal looks ripe for a good Wing Commander mod if you ask me. Here's a few example shots for good measure. 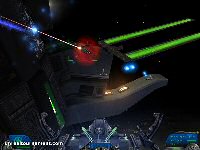 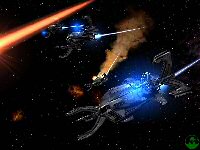 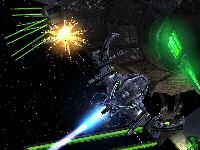 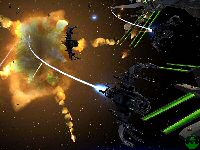 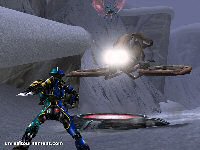 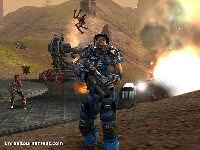 Sorry dial-up Wing Commander fans, I know we've been picture heavy this week. There's been lots of pretty stuff in the news.