There's one more Wing Commander auction from Sean Murphy now available for bidding: a copy of the Wing Commander IV trailer on 35 mm film. These trailers were shown at theaters around the country in late 1995 as part of the game's marketing campaign. If you've seen 'film cels' from WCIV for sale, they're just images cut up from one of these reels - this is your chance to get it all! Opening bid is $5, you can find the auction here. 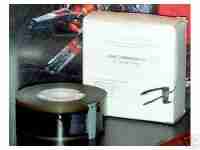 Remember the Privateer 2 Demo? Of course you don't - because no one ever made it available online for very long! Unlike its huge cousin, the Wing Commander IV demo, the Darkening demo was never made available through Origin's FTP. Instead, the little demo that could languished only on magazine cover disks, and quickly faded into obscurity. Thanks to Bob McDob we now have a copy available online! You can get it here. There's a stated mission, but the actual demo is just flying around the Tri-System within the given time limit. Have fun!