Eder has posted the first two pictures of Standoff's cockpits to the Forums! The two images are from the Stiletto's cockpit (and will double as the Morningstar in TrainSim missions). These certainly look impressive - the color and style of Wing Commander 2 in the high-tech Vision Engine! 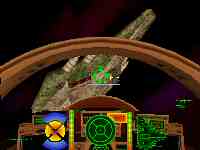 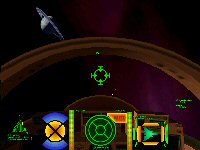 Here, at long last (well, four days last) is Stiletto's final official bio outline - taken from Origin's Official Guide to Wing Commander Prophecy... I can't help but think that the 'Empyrean Zephyrs' is some sort of sly genre-reference - but I can't figure it out.

Stiletto's father is a professional deep-space racing pilot, her mother is a commercial shuttle pilot, and both are combat veterans of the Kilrathi war. They taught their daughter to fly atmospheric craft by the time she was 10, and space ships by 15. A straight-A student, she was heavily recruited by numerous top colleges, but her goal was always firmly set on a Space Forces Academy appointment. Upon her Academy graduation she auditioned and was accepted for a one-year tour with the Space Forces exhibition flight team, the Empyrean Zephyrs, before transferring to the Midway for her first regular tour of duty.

In the engagement against the Demon's Eye pirates, Stiletto was assigned to a flight of five Piranhas making a fly-by recon of the pirate base. On the way back to the Midway, they were ambushed by nine Dralthi. Although two ships (including the flight's wing commander's) were destroyed in the first seconds of the ambush, Stiletto managed to rally the other two survivors and fight through to the Midway. Six of the Dralthi were destroyed in the chase (three by Stiletto herself) even before relief arrived from the Midway and the remaining three pirates were dispatched.

As a result of this action, and her generally high evaluations and flight scores, Stiletto was given interim command of the Midway's junior Diamondback Squadron.