Tolwyn from the Wing Commander Saga project has processed the original Kilrathi Saga intro so it is now playable with the divx codec instead of xanmovie. It's a few megs smaller than the original at 15 megs, and the interlacing has been filtered out at the cost some some sharpness. Tolwyn has provided the space for this video directly from the WC Saga server here. I always loved this movie and its really great use of the Hornet, Sabre and Excalibur. 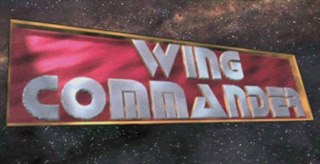 The space based real time strategy game Homeworld 2 ships out today. Certain stores should see it by tomorrow. The original was the first to get this type of game implemented well in three dimensions. Information on the first game's Wing Commander mod can be found here. It would be nice if the sequel got a similar treatment, because what was released of Fleet Action looked pretty neat. You can find reviews and other information about Homeworld 2 here. 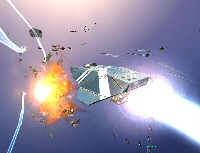 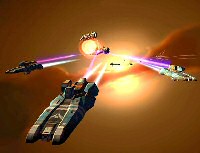