Zohrath is getting back into 3d Wing Commander modeling, and his first new project is the gigantic Kilrathi Dreadnought for Maya. We might not know how they managed to build these things, but you can follow Zohrath's construction of the ship and provide feedback at Crius here. He has also put together a very cool two meg camera clip that pans around the model. We've mirrored that one here. 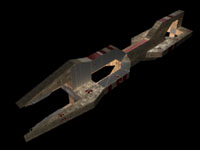 Those that were following Wing Commander events closely in 1999 knew that the CIC was not the only place to get breaking and exclusive information on the upcoming feature film. Dan's "Wing Commander: The Movie" Page doggedly followed the movie's development and premiere. Having outlived the official movie website by several years, this month the site had to be demobilized for Dan's other projects. Some of the cooler features are still up. You can find out about the site's history and check out his neat Premiere Report (featuring a shot or two of yours truly) for the time being. I always recommend that people save interesting things when they encounter them off the web. The Wayback Machine doesn't keep everything, and the web is ever changing. You can read more about Dan and his WC Movie site here.

Subspace Convention Next Month in Holland

We've previously reported that the Ultima and Earth & Beyond communities host international fan gatherings, and I hope you're aware that Wing Commander fans meet at Dragon*Con each year. But did you know Subspace players meet to play Subspace? If you're not familiar with the game, Subspace is a simple yet addicting top-down shooter that was extremely popular among some groups of Wing Commander fans prior to the CIC's founding. Hundreds of people could play together for domination of T-20 while "getting green" in virtual arenas around the world. All this was years before Origin coined the term "massively multiplayer." A few years back Filler created a Wing Commander mod for the game that is not currently in operation (thought it was very fun!). It's nice to see fellow communities going strong, so I was excited to see that many dozens of Subspace fans will be getting together in Holland next month to celebrate their community and play the game. You can find more at the Subspace HQ under June 2 news here.

A huge subspace convention will be held in Holland this summer. The party is planned for 5, 6, 7 AND 8th of August. It'll be absolutely great. There are AT LEAST 50 to 60 players so far, who are coming. And we are still getting a lot of requests from other players who also want to join in.

We will be renting a huge farm in a little place called Oss, where the Convention will be held. Everyone who is coming pays 100 Euros up front, with that money we'll arrange the building, unlimited drinks for everyone and more then enough food.

I can't wait until we get 50 or 60 Wing Commander people down to Atlanta each year. At least there's always the Birthday Party.