Vengeance of the Kilrathi?

Take some time to read the latest chapter of Holding the Line, titled "On Deadly Ground". You can find it here. Here's Raptor's introduction...

HTL continues with part eight of the Tiger Hunt series, called "On Deadly Ground." We're now going to take a break from the Forge's battle against the Nephilim dreadnaught and take a look at the Border Worlds forces distracting the Nephilim. As you saw in part seven, the Border Worlders had deliberately revealed the position of their carriers to draw the Nephilim fighters towards them, and away from the capital ships targeted by the rest of the Combined Fleet. The major drawback to that plan though, is that the flight wings from three different super carriers are now poised to descend on the Border Worlders. This chapter picks up from there, and is written by yours truly, so please send any and all comments to me.

A couple of notes about Border Worlds tactics and fighting styles: I'm working on the theory that the Border Worlders, having older and fewer ships and fighters than Confed does, would have trouble fighting a conventional fleet action. Instead, I would expect that they use their better knowledge of the "terrain" and their unconventional tactics to good effect. I would also expect them to be pretty ruthless when they had to be, as they showed in WC4 by destroying the transports filled with infected Telamon refugees.

Take a breath people, this is a very momentous and historic occasion for the FreeSpace community and for all FreeSpace fans. FreeSpace 2 Source Code has been released.

All of the countless changes, fixes, and modifications that we've all wanted to make to FreeSpace 2 are now possible. I am the last person to ask about the possibilities that this opens up for projects like The Babylon Project, but its definitely a major event.

Making a Mess of a Murphy

The Unknown Enemy site has been updated with the latest progress information. The team has been hard at work converting voiceovers and rotating logo comm videos. Pictured is the 'death version' of the Confed rotating comm logo...

It's true. LOAF turns 21 today which I'm told comes with the ability to buy vast amounts of alcohol and firearms - legally! If you are a freak or even if you aren't you can wish LOAF a happy birthday or ask him to buy you alcohol by emailing him here. Everyone else is!

Emperor Quark has created a nifty Wing Commander Strategy game using Macromedia Flash. You can try your hand at it here (700k) -- a great way to waste those long hours at work. Requires Flash 6, available here.

And Speaking of Flash...

Kn'thrak has found a set of five Wing Commander Windows themes at Top Themes. They're #61 at this site... so go... replace your Windows logo with a cat or something.

HTL continues with the third part of "Further Down The Spiral 2", as the Forge crew intensify their battle against the enemy dreadnaught battlegroup. You saw last week that the Forge pilots had launched a preliminary strike to weaken the dreadnaught's escorts, but had encountered heavy resistance. This week, that battle moves into high gear. This chapter is jointly written by all the Valley Forge writers, so please send any and all comments to them.

As I said last time, the HTL crew have been getting together with the CIC staff to set up an HTL archive based at the CIC. Setting up that big an archive will be likely to take some time though, given how busy the CIC staff are and the commitments we all have in real life. To see us through till the CIC Archive is operational, Neo has kindly uploaded his files to a temporary archive site on one of his own accounts. This contains all HTL chapters up to the end of FDTS 2, which coincidentally is this week's chapter on the CIC. The temporary archives can be found at this address:

A remarkable number of people actually believed Joe was going to play Blair in the Wing Commander TV show. That's just wrong -- we all know he's holding out for a role in Ultima: The Movie. Joe runs The Origin Museum, but he's not a teen sensation)... 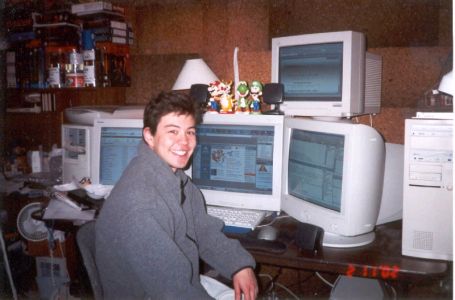