As reported yesterday, the WCZone project has finished their ships pack for SubSpace! Download this file (appox. 1 meg) and unzip it into your SubSpace directory to change all the ships into familiar Wing Commander fighters and capships! This is a very cool addon for any WingNut who's been doubling as a SS fanatic. Credit for the rendering software which allowed this to see completion goes to L.A.W. And, of course, a big round of applause for Filler, who actually produced a fan project that lived up to the hype! Good job!

The Wing Commander: Invasion mod for Star Trek: Armada has successfully imported the F-105 Tigershark class fighter! They've posted two screenshots of this accomplishment -- expect a textured version and then a downloadable version in the near future!

Rylex has rendered the first scene of Final Conflict, which weighs in at 32 seconds -- although he does not plan to publish it until the entire movie is ready. He's provided a screenshot for our enjoyment...

Those readers who are members of the Cult of Sivar already know that today is the annual Ritual of Pukcal, the annual Kilrathi ceremony of atonement at the Temple of Sivar. Have a good one! 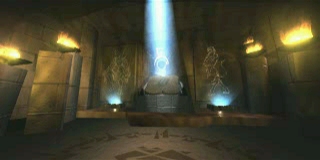 Today is the absolute final day to nominate a Wing Commander site for the Fan Site of the Year Award! Send all nominations here. The voting period will begin tomorrow.

Another interesting article on the situation at Digital Anvil, this time at The Register. It asks an important question: will Microsoft relocate the DA teams to Washington?