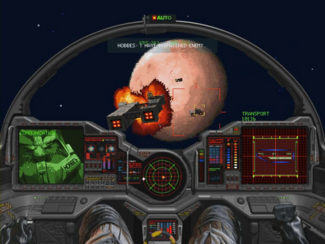 Tamayo II is a Terran colony under the jurisdiction of the Terran Confederation. It is the second planet of the Tamayo System.

Tamayo II is a desert planet with golden terrain, as seen from Tamayo orbit and sparsely populated. It is located in the Day Quadrant of the Vega Sector. It was considered one of the more peaceful colonies, due to its location deep within Confederation space.

During the Terran-Kilrathi War in 2669, Tamayo II was selected as the testing zone for the brand new F-103 Excalibur due to the relative peace in the system. These tests were conducted by the TCS Victory. During the flight tests, the Victory was ambushed by a large Kilrathi strike force. The Victory and her pilots managed to rout the attack, but lost a number of pilots in the engagement. This incursion forced the Victory to instead focus on Tamayo's defense.

Shortly after the ambush, the Kilrathi launched an invasion of Tamayo II, intending to send down several legions of troops via transport. The Victory manoeuvred into orbit around the planet and deployed a strike team led by Colonel Christopher Blair to intercept the convoy. With the help of the advanced Excalibur heavy fighter, Blair and his wingmen destroyed the entire invasion force, saving the planet and forcing the Kilrathi to abandon the entire Tamayo System.