The Sha'Kar-Class Transport is a class of transport that saw extensive service with the Kilrathi Empire in the later half of the Terran-Kilrathi War. 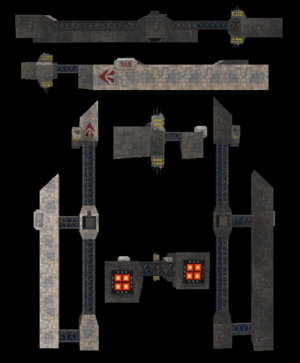 The Sha'Kar is another of several Kilrathi transport classes whose primary purposes include supplying the Kilrathi fleet, refueling capital ships, and ferrying troops to the frontlines. Characteristic of most transports, the Sha'Kar is poorly-armed and possesses weak armor, so it must rely on escorts if it is to reach its intended target.

The Sha'Kar is a modular vessel composed of several polygonal modules connected by "girders".

Many Sha'Kars were encountered during the later stages of the war, serving a multitude of purposes. A convoy of these transports participated in the invasion of Tamayo II, and it was their destruction that forced the Kilrathi to abandon their offensive. When the TCS Behemoth required refueling in the Torgo System during its first actions, wings from the TCS Victory disabled three of these transports so that their fuel could be transferred to the Behemoth.