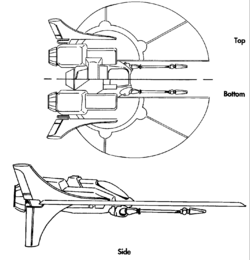 Dralthi from the Joan's Fighting Spacecraft supplement in the Vol. 1 No. 4 issue of Claw Marks

The proper name for this article is simply Dralthi, however that is currently reserved for the disambiguation page.

The Dralthi was a Kilrathi medium fighter. It was included in Joan's Fighting Spacecraft Vega Sector Supplement for 2654.092.

There is perhaps no single ship that is more symbolic of the Empire of Kilrah than the bat-winged Dralthi fighter. A string of early successes combined with a distinct silouette permanently imprinted the Dralthi in the minds of its human opponents. This psychological impact was furthered by the fighter's huge production run - it was the most commonly encountered fighter in the Vega Sector theater of operations.

The first production model, the tiny KF-100, entered service in 2529; as such, it saw service during both the 2594 invasion of the Varni Republic and the 2598 battle with the Mantu. When the conflict with the Terran Confederation began in earnest, the KF-100 Dralthi remained one of the Empire's premiere medium fighters. Though superceded by later models, the KF-100 remained in service through the last year of the Vega Campaign - ultimately playing a key role in the destruction of the Pegasus Naval Station.

The second design (classified simply as Dralthi) entered service in the late 2640s. The new model featured a host of technical improvements, including extended life support and the introduction of an ejection system. They made their debut during an attack on the Epsilon Prima System, catching the TCS Tiger's Claw by surprise. Terran intelligence had failed to predict their extended range - costing the Tiger's Claw five pilots.

The Dralthi was, however, by no means a marvel of Kilrathi engineering: The huge, ovaloid wings blocked visibility to the sides of the fighter, forcing Kilrathi pilots to pitch rather than yaw during combat. Additionally, the shield generators were plauged by technical glitches - if hit too quickly in rapid succession, they would often fail completely.

Notoriously merciless ace Dakhath nar Sihkag ("Deathstroke") was credited with 78 space-to-space kills flying a Dralthi during the last years of the Vega Campaign. His fighter was shot down in 2654 by 1st Lieutenant Mariko Tanaka.

In one unique use of surplus Dralthi, the commander of the Dioscuri System garrison issued the fighters to the planet's low-technology natives, teaching them to defend their planet from human 'aggressors'. The Dralthi was succeeded on the production lines in 2655 by the Dralthi II.

On 2654.110, Jeannette Devereaux of the Tiger's Claw observed that the Dralthi fighter was the most common Kilrathi fighter in the Vega Sector. She also noted that it took 1.4 missiles or over seven laser blasts to destroy the fighter.

The following table is taken from the Wing Commander I & II - The Ultimate Strategy Guide.