Version 2.0 of Wing Commander Invasion is now available! Seven new fighters and nine new capships have been added. Space stations have been beefed up and each side has received a specialized unit - a Confed Pelican repair tug and a Kilrathi command and control ship. Overall numbers of carrier-launched fighters have been reduced to minimize onscreen clutter, and mining facilities can be further upgraded. Work doesn't stop here though! New maps and a third race are in work for the next major release of the game. Star Wars: Empire at War (Forces of Corruption) owners can grab the mod here. A sprightly 9 meg upgrade is also available for version 1.5 players.

...and so it came to pass that v2.0 was released, and with it came a plethora of additional units for the player to construct to destoy his enemy with. But was that the end of the Invasion or could there be more??

Anyway. With the mod seeming to rely on the stock maps, I delved into map making itself and after some initial hiccups and quite a bit of help, I managed to get my first test map done (this was released with v2.0). While this current version was being constructed, I felt it necessary to find something which I could use as a props. With thanks to a member of WCNews forum I have around 16 models which will be converted and used on various skirmish maps. Almost all these will need some sort of poly reduction or rebuilding done to them as they are a bit high poly for my mods needs. I'll be posting some pics of these at a later time. There's also a definite need to get the third side up and running but I'm still undecided as to which it will be (the Nephillim are still prime candidate, with the Border Worlds a close second), and I'll also be looking at the various other sides which appear in the WC games. If I'm able to get a working GC for this version then I will be attempting to include several of these sides as well, albeit as unplayable factions (this is solely due to limited fighter and/or capital ship classes).

Anyway, thats about it for the time being. I'll bring another update as soon as possible. 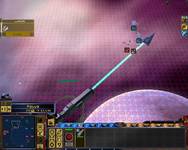