The WC Saga team has released an audio story. It's available as a 23 minute mp3 file voiced completely in German. The events are based on the fiction associated with the mod's prologue chapter. Check it out here (40.8 meg zip). 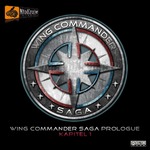 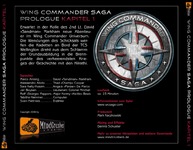 This MCS production is read by Marco Ansing, Alessandro Alioto, Sara Kelly-Husain, Jan Boysen, Ralf "Searge" Pappers, Tabitha Hammer and Sven Matthias. These actors will also be the voice acting power behind the upcoming German version of the Wing Commander Saga Prologue. A musical score by Edward Bradshaw, Tim Janssenss and Dennis Schuster adds atmosphere to this lavish production. A great deal of care and time has been spent creating an audio book which elaborates upon the story of Wing Commander Saga. Get the MP3 file and enjoy the story.... if you can understand German, that is.