RapierDragon's latest paper spacecraft is a design inspired by Firekkan Valtar built for Wing Commander Collateral Damage. He's put quite a few hours into the model so far, and it's quickly taken shape. The pictures below show the progression from engine pods to major subassemblies with vertical fins and finally a completed body. A canopy and finishing touches are all that's missing below. 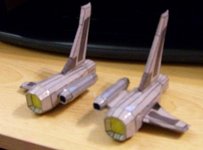 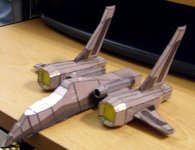 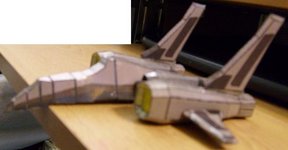 Haven't done the canopy or the detailing, and the underside and tail-bit aren't there, but you can actually start to picture the Firekkan Fighter in its upcoming glory.

It's overhanging the keyboard tray because the nose does curve downward... putting the nose-tip on the surface would mean having to find something to tilt/angle the wings back a bit (would have made for an odd pic).