There have been two recent upgrades to Privateer Ascii Sector that fix a variety of newly discovered bugs. The majority of the changes are incremental fixes, but music debugging has been improved and the groundwork for a new disabling system has been put in place. Weapons that knock out, but do not destroy, targets are now in the game, along with power readouts to match. Disabled ships will play a part in boarding actions in a future version. Get the latest game updates here. 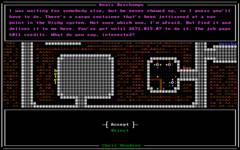