Wing Commander Lego Minis On The Drawing Board

Here's a sneak preview of saf0775's Lego Confed force. He's built the original four fighters and the Tiger's Claw so far using the Lego Digital Designer. Instructions and larger images should eventually be available from the official Lego Factory site. It's pretty amazing how accurate these can be with the limited bricks and options available. To see all of Saf's creations, go to the Lego gallery, type saf0775 in the username field and click on the little triangle next to it. 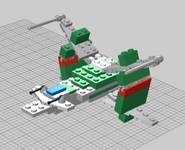 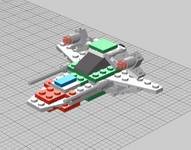 Made with Lego Digital Designer. The instructions should be up on the Lego site shortly. I've made the four Terran fighters and the Tiger's Claw (which is just over a foot long when built) from WC1. I'll make some cats tomorrow night.

I've been a fan of WC since the early days of my 386, and who doesn't like Lego's? I may eventually make minfig scale fighters, but Lego Digital Desinger doesn't have a big selection of colored bricks....so it would make a large scale model difficult. I could probably design a 4 foot model of the Tiger's Claw that would be on scale with my mini fighters, but that will have to wait.

As it is, I'm trying to figure out how to make a good looking Dralthi without having access to orange bricks or plates. It may have to be done in light gray and then you would use the right colors if you have them in you Lego stash.