It sounds like our friends at Mythic Entertainment can finally rest - their years-in-the-making masterpiece, Warhammer Online, goes live today! Warhammer is a major MMO which has garnered much praise during its development. Congratulations to all involved in the project... and here's hoping the game is a smash hit! Wing Commander fans may remember that Mythic recently allowed us to archive a massive collection of Origin's relics - so we can say with some authority that they have a great team which deserves all possible success! Here's the press release, courtesy of Business Wire:

“The Day of Reckoning is finally at hand and I am pleased to invite players to take their first steps into the Warhammer Fantasy universe,” said Mark Jacobs, co-founder and general manager of Mythic Entertainment. “The stage is set and the combatants are ready - it’s time to go to WAR!”

WAR offers a number of subscription options for eager recruits:

Warhammer Online: Age of Reckoning is now in stores everywhere at an MSRP of $49.99. Available for PC, WAR is rated “T” for Teen by the ESRB. Prepaid Game Time™ cards are also available at most game retailers. For more information, visit http://www.warhammeronline.com/.

About Warhammer® Online: Age of Reckoning™

Experience the glory of Realm vs. Realm! Declare your allegiance and join thousands of mighty heroes on the battlefields of Warhammer Online: Age of Reckoning, the new MMORPG from Mythic Entertainment, the creators of Dark Age of Camelot™. Enter a grim world of perpetual conflict to fight for the Realms of Order (Dwarfs, High Elves, and Empire) or Destruction (Greenskins, Dark Elves, and Chaos). Invade enemy lands, besiege imposing fortresses, and sack sprawling capital cities for the glory of your Realm. Wield devastating magic and deadly weapons, battle monstrous creatures, and join your brothers-in-arms in epic Public Quests™. Climb the Bastion Stair, carry your Guild Banner into battle, and unlock the infinite secrets of the Tome of Knowledge as you travel the world. So sharpen your blade and unleash your inner mutation. The Age of Reckoning has begun and WAR IS EVERYWHERE! 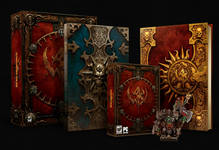