Mark Dacascos, who played Catscratch in Wing Commander 4, will be coming back to electronic entertainment this year. Although he's kept busy with a handful of miscellaneous movies and television series, these days he's probably best known as the "Chairman" of Iron Chef America. His second video game was actually Stranglehold last fall, although he just performed voice work there. Iron Chef: Supreme Cuisine will feature his animated likeness as he narrates the action. It's due out for the Nintendo DS and Wii this summer. AD spotted this one. 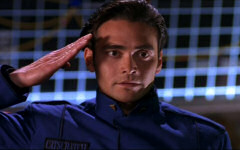 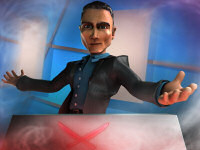 Developed by Black Lantern Studios, the game is based on the highly rated Iron Chef America program, a spinoff of the worldwide hit Iron Chef, produced by Fuji Television. Iron Chef America: Supreme Cuisine features the voice and likeness of the show’s host, Mark Dacascos, and Destineer will announce the involvement of additional talent from the show shortly.

In Iron Chef America: Supreme Cuisine players square off in Kitchen Stadium and battle through a series fast-paced and intense culinary challenges.  Each victory advances players closer to a final showdown that will determine who will reign supreme as the next Iron Chef America.