Here's a last minute warning about an interesting Wing Commander auction: an 'early typo box' for Wing Commander IV (here). It's got a behind-the-screens story that's worth preserving in our archives:

You are bidding on a unopened, new-in-box first run printing of Wing Commander IV - The Price of Freedom. What makes this box unusual is the type on the front of the sleeve. In the lower right corner, just above the Origin logo, it reads "Biologigal Hazard Risk." Why do I know so much about this box and the typo? I was the packaging design supervisor for Origin Systems when Wing Commander IV was released. And I was the sod who designed the box and didn't catch the typo on sign-off. Neither did anyone else in the marketing department for that matter, well at least until after the boxes had already hit the shelves. The typo was fixed for the second printing of the game. This game has been in my archives (in a box in the closet) since 1996 and is in excellent condition. Here is your chance to own a truly obscure piece of gaming history and in pristine condition no less. A truly unique piece of Wing Commander memorabilia!

The box is being offered by former Origin artist Trey Hermann, who was kind enough toshow us some of his Wing Commander Prophecy and Privateer 3 a while back! Bid quick - the auction ends late tonight. 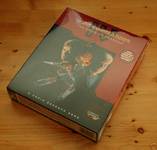