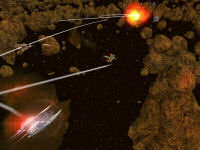 Battlestar Galactica made it out on XBox Live Arcade this week. The regular gang in #Wingnut's been busy with Prophecy multiplayer, Arena and other hot XBox releases lately, but we did find one experienced Wing Commander fan who's given it a shot. Here's Ironduke's impressions.

It felt like Arena on a diet. And if anyone thought Arena's demo was meager, he should try the BSG demo. By the way, I couldn't stand that cutscene anymore after having to watch it the fourth time without being able to skip it. Arrrgh!

Don't you think the similarities between those two games are quite striking? Well, apart from the fact that they're both space shooters, Galactica seems like an Arena clone with a little less variety to me - from fighter selection to game modes to pick-ups. It even features the barrel roll and some sort of Immelman turn as special maneuvers, accessible via the right stick. 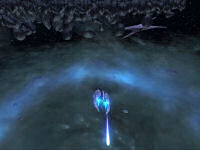 I admit I expected more from BSG. While the graphics quality is nice (IMHO even better than Arena's), it just doesn't feel right. It's like playing Test Drive Unlimited after playing Forza Motorsport 2, if you know what I mean. After playing that demo, I just had to start up Arena again. Hopefully other people will do the same, finally recognizing what great an arcade game Arena really is.

The only thing I do miss in Arena is BSG's single-player campaign. Well, I'm still desperately hoping for an Arena expansion pack in the future (or at least any other DLC)...

Sounds about right. Just by the numbers alone (fighters, game modes, max players in multi, etc), Battlestar has half the content of Arena. It's available on Live Arcade now for the same price, 800 MS points (~$10), and PC for $19.99.