One of the most unfortunate 'time and budget' cuts from Arena was the game's avatar system. It would originally have had a character generator which made 3D avatars for individual players... which would then appear on comm screens, Wanted posters and in other places. A lot of concept art was done to create Terran, Kilrathi and even Firekkan characters! First up is a drawing of a typical Kilrathi 'talking head': 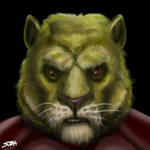