This space station shows up in a lot of early concept art but was ultimately replaced with the Perry-style base seen in the game's intro. It survived well into a working build of the game, though - when Chris and I first saw Arena the original station was in place. 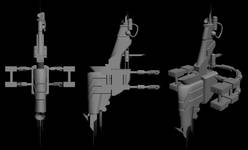