In the original concept for Wing Commander Arena ships would be upgradable in a manner similar to Privateer. This is concept art of a modular cannon which could be mounted on the outside of a ship's hull. The style of art reminds me of some of the sketches done for Privateer Online. 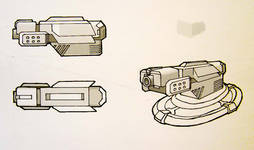