Stepping back from the familiar, here's something outstanding - a new capital ship! This was an early concept for the Kilrathi flagship, before the 'battlecruiser' look was adopted. It looks like a heavy carrier... similar, perhaps, to the Snakeir from Secret Missions 2. 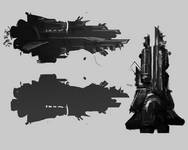