The initial concept for Wing Commander Arena had the designers creating an entirely new set of Wing Commander-style ships... and this was what they came up for the Kilrathi! It's sort of a cross between a Dralthi and a pulpy World War 2 jet airplane. Check out the Imperial logos on the twin tails! 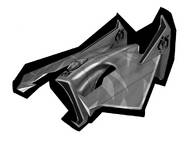