A clear winner has been apparent in our poll for a little while now, so it's time to wrap this one up. The Capital Ship Combat mode won out as the most anticipated multiplayer mode in Arena. With more than two thirds of the vote, it looks like Wingnuts will be lining up soon to take down battlecruiser after battlecruiser with a team of their friends. These results were probably tilted somewhat by the number of times we've seen this particular mode in the various videos and promo shots. Capturing Satellites received the fewest votes, but I think it'll be a big hit once players learn more about each game type. EA released two videos back in May that illustrate how strategic planning and coordinated assaults are the key to winning in this king-of-the-hill variant. On the other hand, the second-to-last Space Station Match choice should also be popular for pilots who want to quickly get to the action and blow up a lot of Kilrathi (or Terrans). 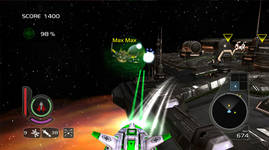 Our next poll should come as no surprise. Arena isn't just about massive online battles. There are several solo adventures to fly when you don't feel like competing against live players. Whether it's protecting a Midway class carrier or a critical satellite relay, you can only choose one mode to play first. Which will it be? The opportunity to hone your skills in the Proving Grounds or engage in a carefree Space Station Melee might also appeal most to some Wingnuts. Here's a recap from Sean Penney:

"Melee" is a free-for-all against a large number of AI ships. They fight each other and the player. The level is a very cool space station map. The engagements have a time limit and at the end the rank list is transferred. Although you play against the AI you are nevertheless in competition with other players.

"Meteor Storm" is a fun small game in which one must defend up to three satellites against emerging, burning meteors and plundering pirates again and again. The play ends as soon as the satellites are destroyed. An online rank list is likewise included.

In "Gauntlet" your own space fighter is stationed on a Midway-class carrier, which has had some interesting change over time. The task is to defend the carrier against attacking enemies who want to destroy it. With each new wave of enemies you can expect a larger number of attackers, better ships or more intelligent pilots. Some really spectacular firefights emerge later in the level. Gauntlet also offers a rank list at the end for comparison with other players.

In "Proving Grounds" the player is taken to an extensive area with a lot of open space with pickups, obstacles and numerous targets to shoot at. In addition, some of them fire back. As the name suggests, this is a training mode. Regard it as a playground in which you can try all the ships, weapons or maneuvers however you want. Proving Grounds contains no time limit, does not count your firing and does not have a rank list.