Haven't I Seen Your Face Before?

In the grand tradition of MANTIS and FreeSpace, Sierra Online has unveiled the first copy of Wing Commander Arena! It's an Xbox Live Arcade shooter based on the BattleStar Galactica license that seems to borrow Arena's concept point by point - 3D ships on a 2D plane, a more complex maneuver system, a limited set of single player missions... in fact, the game-as-announced does everything by halves. Battlestar includes eight ships to Arena's eighteen, allows eight players instead of sixteen and features five game modes instead of ten. Even their space backgrounds seem a lot less inspired. Where'd you go, Roger Wilco?

Perhaps this announcement will best express to those unfamiliar with XBLA how cool a concept Arena is - its very announcement is now inspiring a host of imitators the same way that the original Wing Commander lead to games like X-Wing and Star Crusader. Only time will tell if particular example innovates on the concept like the former or if it steals whole cloth like the latter. TeamXbox has posted an article on it here. They've also released some familiar screenshots. Pictured below: a Paktahn bomber heads into the Boneyard (left) and a Dralthi dogfights a Rapier (right). 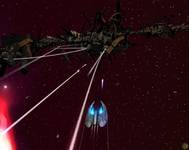 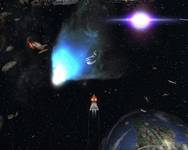