What Will You Fly? 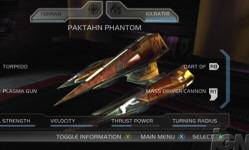 Today's new poll asks which upcoming Arena fighter you're anticipating the most. There will be three variants for each of the six main frames for a total of eighteen flyable craft. Each ship is a classic design from earlier in the series, so they should all have their fans. It'll be interesting to see how these results compare to the numbers after pilots have gotten a chance to play with each fighter. Check out our Arena Ships Preview to learn more about these famous designs.

Our last poll asked which Arena feature was most exciting. Nostalgic Wingnuts swept the votes with "attention to WC history" in strong first place. The "return of classic ships" came in second. Exciting new features like sixteen person multiplayer and complex capship battles followed next. Either way, there's a whole lot to look forward to!