Call to Call to Glory

Chicken has announced an interesting new fan project. It's a Wing Commander RPG based on classic Final Fantasy-style games (which were themselves based on Origin's Ultima series). The name of the project is Wing Commander: Call to Glory. Here's the official word, plus the game's title screen!:

Call to Glory is a Wing Commander RPG being built in the tradition of old games like Final Fantasy III (VI for the Japanese), Chrono Trigger, and the Dragonquest series on the antique Super Nintendo.

It currently is being developed using the open-source RPG Toolkit.

The player assumes the roll of a Confed Marine in a Secret Ops mission gone wrong during the bloody Kilrathi offensive of WC3. As Confed is forced to pull back, the TCS Valhalla is pinned between a panic stricken colony and an invading Kilrathi force hell bent wiping you and the Valhalla out of the system for the glory of Sivar. 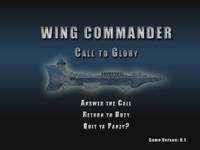