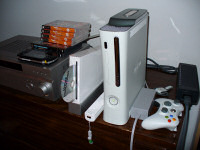 Now that the last two major systems in the new console cycle have been released, it's time again to ask which you'd prefer for your next Wing Commander game. Lots of things have changed since we last ran the poll, and the system that the next WC game ended up being for wasn't even an option back then. The PC isn't a choice in order to keep the results interesting, but there is amazing potential for new games with each of the listed options. Let us know which one you'd like to see a game on the most.

Battlestar Galactica was the winner of our last poll. I would've expected Space: Above & Beyond to take the top spot, but BSG's current popularity on television seemed to give it a good boost.