Someone Got His Wires Macrossed 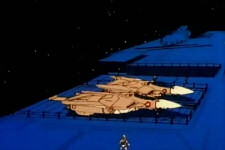 Bob McDob has found an interesting anime music video which puts the Wing Commander movie's audio over animated footage from the Macross TV series. Here's what the creator, SulliMike23, has to say:

I simply decided to use the Trailer for the Wing Commander movie for this one. For the cast, it goes as follows.

I've gotten the video and the enemies shown in all three series will represent the Kilrathi. There will be some parts where the lip sync will be off cue, but it'll be worth it.

I've always wondered if you could set the audio to the 1999 movie to the animated characters from the original game -- this seems to indicate that it might turn out well. You can download "Macross Commander" here (16.9 mb) in WMV format.