That Would Be Talon!

... and here's something very cool that we found in the SOS Mission file: a continuation of infamous 'CIS CODE 3' mission which was 'commented out'. A second e-mail from the CIS that would have further cemented the idea that the unknown ship might have flown in from the original Privateer:

//FROM: CIS HEADQUARTERS, SPECIAL OPS. DIV. {CR}
//TO: Ser Lev Arris {CR}
//{CR}
//The pilot you picked up some time ago, has come around after a brief period
//of shock. Since then he has made surprising improvements, and hopes to
//return home very soon. He claims to come from another part of the galaxy
//somewhat similar to our own.{CR}
//{CR}
//All in all this is a very interesting individual, though we can't tell if he's
//completely insane or just suffering some temporary nerve damage due to some
//head injury. In any case we will keep you updated, Ser Arris. Once again,
//thank you for your speedy attention to his distress call.{CR} 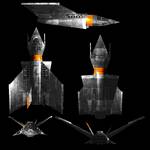