Standoff Episode 4 Back On Track

The Standoff team reports that they're now picking up the pace on Episode 4: The Battle of Sirius. Progress was going fairly slowly around the time of their last update, but things appear to be in higher gear these days. New missions, in-game cutscenes and music have been coming together well over the last few weeks. Prerendered cutscenes and in-game fiction have not advanced as much, but there's somewhat less work remaining in those areas to begin with. A teaser image was also released along with the general project status update. As we get closer to the game's chapter, additional news posts should happen more regularly. 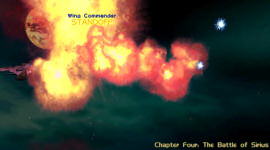 We've put up the news update. Only one new screenshot this time, and the progress page doesn't seem to have changed too much, but believe me, the past two weeks things have been going much faster than the previous three-four months, and we intend to keep it that way. So, the gaps between news updates are going to be much smaller from now on.