Preview impressions of Command & Conquer 3 are pouring in now that the Electronic Entertainment Expo is under way. A small number of official screenshots have been released, and more will filter out over the course of the week. Goku has also provided a couple neat shots from the recent PC Gamer announcement article. The text of the piece also makes a reference to the game's upcoming video shoot. Apparently Electronic Arts is putting together another live action film component for this popular franchise. A little while ago I would have said it was a foregone conclusion that the next Wing Commander game would use computer generated characters, but EA still seems to have faith in classic concepts for classic games.

Some questions, such as how Kane has returned from the dead more times than Jason Voorhees, will be answered when the game ships sometime in 2007 (we'd guess later in the year rather than sooner). But other questions, such as whether Joseph Kucan will reprise his role as the villainouse Kane, can't be answered because casting for the live-action scenes hasn't yet begun.

The said, the team at EA LA knows quite a lot about what it wants the game to deliver. C&C3 will use a modestly updated version of the brawny SAGE engine that powered The Battle for Middle-earth II, with tweaked particle effects to "double down on making cool explosions, weasther effects, dust, and smoke." 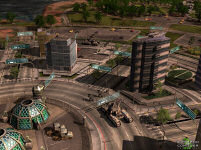 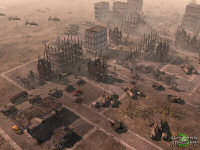 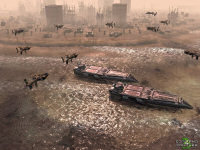