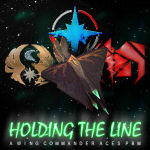 Unfortunately real life has been getting in the way lately for PBM Coordinator Raptor, but now things are back on track. Here's a new chapter of Holding the Line to prove it. The action is picking up, and major events are taking place that will ultimately shape the story's conclusion. Raptor has more details:

HTL continues with the second chapter of Battlegroup Auriga's epic battle against the Kraken. I know this is getting to be a familiar (and tiresome) refrain from me, but apologies for the delay in getting this chapter to you. I've gotten a few of the things that were keeping me away from HTL duties sorted out now though, so (fingers crossed) you'll be seeing at least a chapter a month from now on. Many thanks to everyone for their patience.

As you saw in the last chapter, the crews of Battlegroup Auriga had received orders to hunt down and wipe out a Nephilim ship killer, the single biggest danger to the Combined Fleet fighting the Nifelheim battle. The pilots and crews had been briefed, and the battlegroup had made its first contact with the enemy. This chapter picks up from there, and is jointly written by the Valley Forge team. Please send any and all comments to them, not to me.

The story is at: http://www.holdingtheline.net/ch209.htm