Due to a lot of requests from forum members, work on translating Deacan's Privateer 2 fan novel from German in to English has begun. Rather than relying on Babelfish, Deacan has recruited a friend to do the work, and a sample of the first chapter is now available here. A section of the sample has been reproduced below. 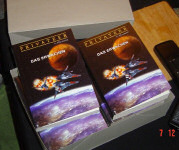 Hermes.
For most of the people living in the Tri System this was just a meaningless, dirty planet which was lucky enough to be at least geographically close to the metropolises Crius and Hades. This piece of wasteland had been left years ago by industry and craftsmen; now only mercenaries, pirates, and other rather nasty subjects settled on the planet now. Dirt and waste covered nearly every street, the continuing decay of society was a smelly companion. Days here started and ended with death, either by violence or by one of the countless diseases which were present here. Altogether, this was a place that a sensible human being should avoid.

All of this probably went through the stranger’s head, too, who as exchanged the cockpit of his ship with the asphalt of the runway mere moments ago. The air under the ship was still blazing from the heat of the engines when a man from the maintenance crew walked over to him...