It was exactly one decade ago today that the interactive movie reached its high water mark: on February 12th, 1996 Wing Commander IV: The Price of Freedom was released.

Wing Commander IV will go down in history for its famous film shoot. With an estimated budget of $12 million, Wing Commander IV was at the time the most expensive video game ever made. Like its predecessor, Heart of the Tiger, Wing Commander 4 featured a cast of professional actors -- including Mark Hamill, Malcolm McDowell, Tom Wilson and John Rhys Davies. For the first time, though, the movies were shot on actual sets in Los Angeles using 35mm film. Series creator and director Chris Roberts' had finally brought to life the project he had dreamt of for years: a blockbuster Hollywood movie where you were the star. 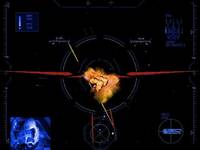 The Austin-based Maverick Team deserves equal praise for Wing Commander IV's success. In terms of gameplay it was Heart of the Tiger writ large. Wing Commander III's visually stunning but technologically cumbersome flight engine was streamlined beyond all expectations: for the first time in the series' history a new Wing Commander didn't necessitate a major hardware upgrade. At the same time, the team introduced a host of new features that have now become standard in such games: dual wings, projectile and charging guns, in-flight interactive choices, a FMV map, infiltration and capture missions and more. 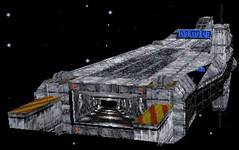 Equally important were the moments of quiet brilliance. Wing Commander 4's artists visited the USS Lexington museum and applied what they learned about the look and feel of real life naval aviation to the game. For the first time individual capital ships had their own specific artwork - the TCS Lexington was distinct from the Princeton, the BWS Intrepid from the Tango. The game introduced a working background to the Wing Commander universe, featuring missions set against a complex panorama of communications arrays, weapons factories, shipyards, spacelabs, starbases, turret mines and the like. Ground missions featured a detailed surface, eschewing the lumpy yellow blobs of the previous game. These little touches made gameplay more immersive than ever before - and have continued to reward a fandom interested in Wing Commander continuity to this day. 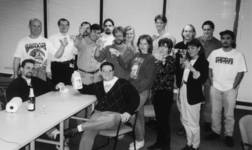 Those who waited for Wing Commander IV will forever remember January, 1996 as the longest month of their lives. The game was originally scheduled for release December 8th, 1995... fans awoke that day to find the disappointing news at Origin's early website: Wing Commander IV was delayed until February. Then, it hit. Wing Commander IV inaugurated one of the greatest years of Wing Commander fandom. Bookended by the release of two major titles, WC4 and Privateer 2, 1996 was an amazing year that helped create the community we know today. The WC:CCG was in full swing, the Academy series was on television, Baen kept novels in print and in development. In the news reports of a theatrical movie began to trickle in -- at the message board fans debated Tolwyn's ideology while lusting over the new Bearcat and Lance fighters. It was truly the best of times.